Plant a tree in memory of Lucy
An environmentally-friendly option 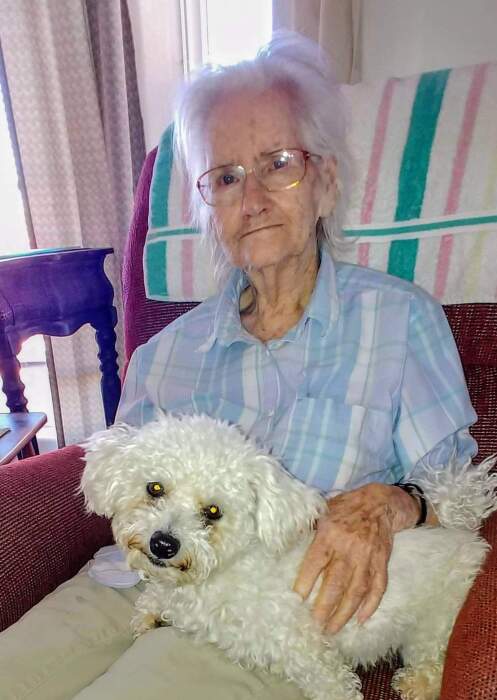 Lucy Mae Barber was born on December 12, 1929 in La Junta, Colorado to Mable Barber and Ned Barber. She was the eldest child, with three siblings, Raymond, born in 1933, and the twins, Josephine and Emma Jean, who were born in 1935. Mable and her four children moved to Branson, Colorado in about 1939, where Lucy first attended elementary school.

As the eldest child, Lucy was tasked with the care of her younger siblings, especially the twins, and capably accepted that role, washing, combing, cutting and curling hair, and even sewing school dresses for herself and the twins. She was an accomplished seamstress at an early age. This was a tough task, considering it involved twin sisters who insisted on equality to the nth degree.

Lucy had taught herself to play piano at a young age. She had a great talent and learned to play by ear. Jo and Jean enjoyed sitting on each side of her and singing (not real well) and threw Lucy off key and messed up her playing and singing. For some reason they found this to be amusing.

Despite her sibling responsibilities and the fact that she didn’t start school until she was ten years old, Lucy had the intelligence and drive to graduate as valedictorian of the Branson Class of 1949 (1948?). Lucy worked at Monument Lake for two summers while in high school. After her graduation, she moved to Trinidad, Colorado where she worked at a drugstore. In August of that year, the rest of the family moved to Texas. Lucy remained in Trinidad, worked at the bank. Then she met her future husband, George Van Matre.

George and Lucy got married on January 28th 1950. While living in Trinidad their 4 children were born. George William, 1950, Sharon Mae, 1951, Linda Faye 1953, and Robert Wayne 1956. In 1956 George and Lucy moved to Pueblo. Where George received employment at the CF&I. Here he would work until he retired. Lucy assumed the fulfilling and relentless job of raising 4 young Children.

Lucy was always busy, not only with her own 4 kids but all the neighbor kids hung around a lot of the time also. Lucy became a 4-H Leader and excelled at helping the children achieve their goals and achievements. Lucy always had her chickens, her milk cow, and grew a wonderful garden. The produce would be canned and frozen each fall.

Lucy seemed to be a great advocate for the whole neighborhood. In 1968 George and Lucy purchased a farm south of Avondale. This was their dream to acquire and farm more land from the 6 acres they owned west of Pueblo. Here Lucy was in her element. The garden was a lot bigger, the animals multiplied, her children were receiving the education and experience of real farm life. This farm is where their children would finish growing up.

Lucy loved to knit and sew when she could find the time also.

In 1970 George and Lucy bought even more acreage and a larger farm in Manzanola. George continued to be employed at the Steelmill in Pueblo. He still had time to work the farm. We all know the role Lucy had however. Lucy had a lot of responsibility with not only keeping the house and everything orderly but she had a huge responsibility of maintaining everything on their farm with all the cattle, pigs, horses, chickens etc. etc.

By this time the Grandchildren started arriving. Lucy excelled and blossomed at being a Grandmother. Of course they all loved to stay at Grandma and Grandpas. Always so much fun and lots to do.

In 1991 George and Lucy moved to Pueblo West. George retired from the Steelmill. They sold the farm in Manzanola. Lucy took on the job of being full time Grandma. She was amazing with her Grandkiddos. Once again living her dream life.

A year or so later they had a larger home built in Pueblo West and moved into it. Lucy decided she would like to sell Avon. She once again excelled at this job. Her customers all became her good friends. Not sure how she ever made any money because she would almost feel guilty charging any one more than her cost. Lucy's customers stayed with her until she retired from selling many years later.

Selling the house they were living in to Robert and Jane, George and Lucy then bought Lucy's final home. Here she enjoyed her Grandchildren, gardening, sewing, knitting, crocheting, reading, and selling Avon. Lucy always did very well at everything she did. Her biggest joy was having family over for meals. Their house was the gathering place.

Lucy will be greatly missed, but each and every one of us has beautiful and fond memories of this amazing caring lady with a heart of gold. Lucy enjoyed life and thoroughly loved her Husband George for over 71 years. Her life was a legend and an influence on everyone she touched.

We love you and miss you Lucy. You have left behind a great legacy and amazing memories for all of us.

Till we meet again:

Plant a tree in memory of Lucy by clicking here.
To send flowers to Lucy's family, please visit our floral store.

A service summary is not available

Plant a tree in memory of Lucy
An environmentally-friendly option

Plant a tree in memory of Lucy

1 tree planted in memory of Lucy

A Memorial Tree was planted for Lucy Van Matre

Plant a tree in memory of Lucy